After Abhimanyu admits to the police that he did not get the proof from Akshara, the police make an arrest and take Kairav and Manish into custody. After some time has passed, Akshara comes to the realisation that the evidence was taken by another person. 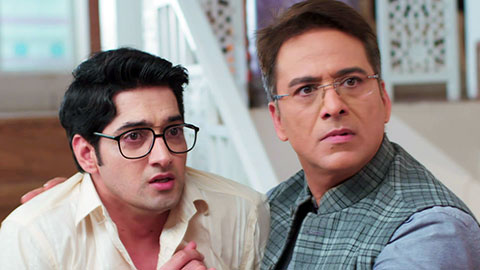 In today’s episode, Abhimanyu tells the media that Kairav killed his sister and fled. He claims he obtained a forged passport and was hiding in Mauritius. According to Abhimanyu, Kairav is still seeking a way out and will be arrested immediately. Akshara attempts to halt Abhimanyu. Abhimanyu will not stop.

He requests that Kairav be detained. He exits the building. Akshara yells out Abhimanyu’s name. Kairav suffers from a panic attack. He believes the inspector will send him to jail once again.

Kairav attempts to flee. The inspector apprehends Kairav. In the heat of the situation, Manish shoved the inspector. Inspector decides to arrest Manish for concealing Kairav while being aware of his allegations. Goenkas is concerned.

Akshara sobs as she witnesses Kairav and Manish being detained. She believes Abhimanyu made a mistake. Abhimanyu informs Mahima that he has sent Anisha a birthday gift. As he puts Kairav behind the prison, he says, “She received justice. ” Mahima and the Birlas cry.

Vansh calls his lawyer and requests that something be done before it is too late. He claims that if Kairav is imprisoned, it would be difficult to get him out. Abhimanyu decides to visit Manjiri. Mahima, Parth, and Anand decide to join Abhimanyu. Akshara confronts Abhimanyu.

She asks him why, after having given him the evidence, he had Kairav imprisoned. Mahima requests that Akshara quit influencing Abhimanyu. Akshara comes in to speak with Abhimanyu and ignores Mahima. She also questions why she would have concealed Kairav in Goenka Villa if he was guilty. Akshara questions why she would have contacted Kairav to see Abhimanyu despite knowing he would come to visit her.

Mahima says she was convinced Abhimanyu would support her. Mahima requests that Abhimanyu and the others go. Akshara tells Abhimanyu that he made the wrong mistake by imprisoning Kairav. She says that he will be sorry. Abhimanyu decides to return to his room to get the proof.

Neil believes that both families will never be reunited. Harsh advises Anand to avoid drinking alcohol since it harms his health. Anand tells Harsh that it helps him cope with the loss of Anisha. Manish was also detained, according to Abhimanyu. Birlas refuses to release Manish from prison. Manish, according to Abhimanyu, should not be imprisoned. Akshara believes Abhimanyu is unable to punish Manish and Kairav.