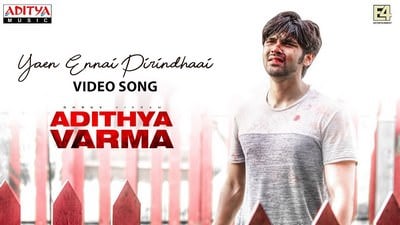 Yaen Ennai Pirindhaai is a promising Tamil song and it has its suitable Tamil lyrics drafted down by proficient songwriter Radhan.Adithya Varma is an upcoming Indian Tamil-language romantic drama film directed by Gireesaaya which features the track ‘Yaen Ennai Pirindhaai’. Sid Sriram is an Indian-American playback singer who lent his voice for the entertaining anthem and Radhan is an Indian music composer who wrote and composed the music for it.Dhruv Vikram is son of Vikram (actor) who is making his acting debut with Vikram in Adithya Varma, the Tamil remake of the Telugu film Arjun Reddy. Banita Sandhu is a British actress born, raised in Caerleon who is playing as Meera against Dhruv Vikram who is acting as Adithya Varma.

If you spot mistakes in the lyrics of ‘Yaen Ennai Pirindhaai’ from the Tamil motion picture ‘Adithya Varma’, You can help us correcting the lyrics published on this page. If yes, please visit our contact page and mention the mistake and the corrections to be made. We will glad to fix the lyrics.