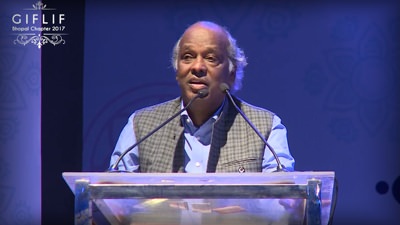 My boy, you could fall in love with someone,
But don’t love her beyond the boundaries.

You must be capable enough to resist it.
You could always skip away, but should never fall for it (love.)

I will pluck the stars away; I won’t go back home empty-handed.

The epidemic (or a plague) has spread everywhere,
It is not the right time to fall for someone.

The God of Death is known for choking ‘One’ to death,
but you don’t have to fear his cruelty.

Above is the video of Dr. Rahat Indori performing his famous poetry ‘Bulati Hai Magar Jane Ka Nai’ live on a stage at Rizvi Group Kavi Sammelam in Dubai.