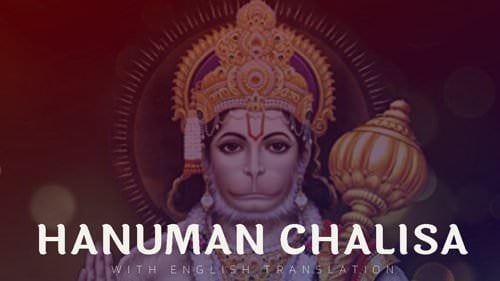 Check out the written lyrics for ‘Hanuman Chalisa’ in English with full line by line translations. A Hindu saint and poet Tulsidas (Goswami Tulsidas) has written the Hanuman Chalisa lyrics in the form of a Mantra. The English (roman) lyrics are applicable for Hanuman Chalisa in Hindi, Telugu, Gujarati, Tamil languages. If you are eager to learn the meaning Sanskrit words used to write Hanuman Chalisa, You may want to read the explanation for all the verses.

“After cleansing the mirror of my mind with the pollen dust from the Lotus- feet of Divine Guru,
I pronounce the flawless glory of Lord Rama, which grants four fruits of Righteousness (Dharma),”

“Seeing this being as intellect less, I recall Lord Hanuman. Give me strength, intelligence, and knowledge, cure my body ailments and mental imperfections,”

“Victory to Hanuman who is the ocean of Wisdom and Virtues,
Victory to the king of Monkeys who is illuminating three worlds.”

“You are the messenger of Rama (to Sita), You are the abode of incomparable power.
You are also called by the names of ‘Anjani Putra’ (Son of Anjana) and ‘Pavana suta’ (son of wind god)”

“Oh, mighty valorous one, of terrific deeds whose body organs are as strong as Diamond (or the weapon of God Indra).
Cure my evil mind oh companion of those with a pure (good) mind,”

“You are golden colored, and you are shining in your beautiful attire.
You have beautiful earrings in your ear and curly hairs,”

“Vajrayudha (mace) and flag are shining in your hand.
Sacred thread made of Munja grass adorns your shoulder.”

“O partial incarnation of Lord shiva, giver of joy to King Kesari.
Your great majesty is revered by the whole world.”

“Oh, one learned in all Vidyas, one full of virtues, Very clever.
You are always eager to do Rama’s tasks.”

“You enjoy listening to Lord Rama’s story;
Lord Rama, Lakshman and Sita reside in your heart.”

“Assuming the smallest form, you saw (visited) Sita.
Assuming the gigantic form you burnt down the Lanka”

“Assuming a terrible form, you slew demons.
You made Lord Rama’s works easier.”

“You brought Sanjeevini mountain to save Lakshmana’s life.
Lord Rama embraced you in joy.”

“‘May the thousan- headed serpent Adishesha sing of your glory’ saying this Lord Rama embraced you.”

“Sanaka, Brahma and other Royal sages,
Narad, Saraswati and Adishesha”

“Yama, Kubera, Dikpaalakas, poets, and singers;
they can not describe your greatness properly.”

“You helped Sugreeva.
You made him friends with Rama who gave him his Kingship back.”

“Vibheeshana accepted your Suggestion.
He became the king of Lanka because of your advice, the whole world knows it”

“You flew towards the sun which is thousands of years of Yojanas away, thinking of him as sweet fruit.”

“Putting the ring of Rama in your mouth, you jumped and flew over Ocean to Lanka, there is no surprise in that.”

“All the difficult tasks in the world, become easy if there is your grace.”

“Your the doorkeeper of Rama’s court.
Without your permission, nobody can enter Rama’s abode.”

“All happiness stays with those who take refuge in you.
You are the protector, why be afraid? “

“Only you can cancel your powers.
All three worlds tremble in fear.”

“Evil Spirits and Ghosts don’t come near when your name is heard, O great Courageous one.”

“Diseases will be ended; all pains will be gone, when a devotee continuously repeats Hanuman the brave’s name.”

“Hanuman will release those from troubles who meditate upon him in their mind, actions, and words.”

“Rama is the king of all, he is the king of yogis. You managed all his tasks”
or in other translations.
“He whoever takes refuge in Rama you will manage all their tasks.”

“Whoever brings many of their wishes to you, they will get unlimited fruits.”

“Your glory is for all the four yugas,
Your greatness is very famous throughout the world, and illumines the world.”

“You are the guardian of Saints and Good people.
You killed demons, and you are dear to Rama.”

“You have the sweet devotion to Rama.
May you always be a devotee of Lord Rama”

“He who sings of you, at the end of the life he attains to Lord Rama’s abode.
Where he will be born as a Devotee of Lord Rama”

“Not contemplating on other gods, gets his all happiness from Hanuman by serving him”

“Pains will be removed, all afflictions will be gone of who remembers Hanuman the mighty brave one”

“Victory to you O master of the senses. Show mercy on us as a Guru does”

“He whoever recits this hundred times, his chains of Bondage will be cut, Great happiness will be his”

“He whoever reads these verses on Hanuman, he will get spiritual attainments,
Lord Shiva is the witness to this statement”

“Tulasidas is always a disciple of Lord Rama.
O lord make my heart your abode”

“O Son of wind God, remover of difficulties, oh one of auspicious form.
With Ram, Lakshman and Sita reside in our hearts of King of Gods.”


Reading Hanuman Chalisa for years, many have gained the efficiency of chanting the Hanuman Mantra (Chalisa) without having a written copy in front of them, also at an exceptional speed. The Hanuman devotees from around the world have been using ‘PDF’ or ‘E-books’ with them. You may want to bookmark this page to read the lyrics to Hanuman Chalisa every day, as well as to find out the meaning of each word.